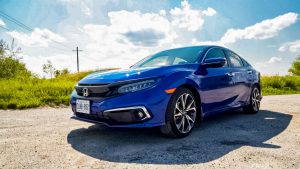 On paper, it’s quite difficult to find fault with the Honda Civic Touring. It’s well-equipped. It has a spectacular sound system. The ride is soft. The interior is comfortable and well trimmed. It’s fuel efficient. There’s enough space in the rear seats for even the most growth-spurt stricken pubescents and room in the trunk for two large hockey bags or all of your groceries.

At a selling price of just under $31,000, it’s a bargain compared to a similarly optioned posh BMW 3 Series or even the blue-collar Dodge Charger.

With sporty exterior styling, a comfortable, adjustable interior and available all-wheel drive, the HR-V is the ideal crossover. The 2022 Civic Prototype promises a thrilling new direction for the sporty compact car. LEARN MORE LEARN MORE SHOP CERTIFIED GO Discover how Honda has helped in the fight against COVID-19.